Bullets In The Dark

Finally Friday, I hope that your work week has gone by rather smoothly. I’m excited that today marks the third and final part in this week’s story. Today’s piece chronicles the end of a journey to save the world. If you haven’t read the first two parts then click here for part 1, and here for part 2. Let’s take a look at today’s picture: 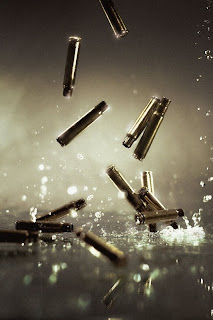 Bullets In The Dark

Down through the Rabbit hole,
And across the underground city,
They kept telling me that I was the savior,
That I would stop this kind of destruction,
I trekked across the city,
Walking day and night,
And on the fourth day,
I walked first heard it,
The gunshots,
Exchanging,
Back and forth,
Followed by explosions,
I slowly noticed that the city was turning,
Into a dark, dark black
The further I went,
The darker things got,
I breathed in,
Noticing that the smell of death,
Was lingering in my nose,
As I got closer to the battlefield,
I could no longer smell air,
Instead only the stench of charred flesh,
Would hold in my nose,
I watched from afar as the sky was lit up,
I took a deep breath,
And I wondered,
And almost as if on command,
As I crossed the threshold,
Of the battlefield,
The gunfire stopped,
Everyone watched me,
As I walked into the center of the of the carnage,
I felt every eye on me,
And I heard,
Guns hit the ground,
I watched as they’re faces,
Stared in disbelief,
I stopped in between them,
And begin to talk,
I tell them that the world,
Could be a better place,
Should they stop they’re fighting,
They hang onto to every word,
And slowly I start to watch them walk away,
Leaving their weapons behind,
I waited,
And watched,
As the last of them walked away,
Patting me on the back,
I felt like I had achieved so much,
So fast,
And with so little effort,
I couldn’t believe it,
I began the walk back through the city,
From which I had came,
The trip back,
Seemed to take less time,
Then before,
I finally reached the hole,
From which I came,
Where I met my batwingged friends again,
“Congrats,”
They said,
“It’s now it’s your time to go back home,”
They pat me on the back,
And in a whirl,
I was standing back in the forest,
The trees were still in the same place,
But now in the sky,
I see the green skies,
Swirling,
And I can only hope that I have the luck,
Above the ground,
That I had in the rabbit hole,

Originally I wasn’t a fan of the idea of using this weeks pictures for the purpose I did. I have to say that the entire story turned out really good. I hope that you enjoyed the entire story. I’d love your feedback and thoughts in the comments section.

You can connect with me in the following ways:

You can subscribe to have the blog sent directly to you upon publication. Simply put your email in the upper right hand corner box. You can also fill out the form and join the mailing list to receive a ton of free things. You will get inside access to everything going forward, including a number of free writings and other things. If you sign up right now you’ll get a copy of “Life After Dark” and a preview of “Six Feet Under” both stories The Blackout Series. Finally,You can donate using the paypal button at the top of the blog. Any donation would be helpful.

Until the next time you want to take a trip through the gates of hell and into the demon’s head, I’m Kyle Robinson wishing you a safe trip back to the surface.