It’s early as hell on Saturday. This post was supposed to be up on Friday afternoon and I failed. However, I hope that you have enjoyed this week. It’s odd how I spent the beginning of the last two editions of “In The Demon’s Head” reflecting a little more on the past. Today though I’d like to take a moment and tell you about what’s going to happen next week. For next week’s photo-blogging challenge I’m going to attempt to write 3 pieces based around 3 different pictures, that tell one story. It’s going to be an interesting challenge that I probably won’t be able to do every week but I think I want to try it. That’s  for next week though. For today let’s  look at the picture: 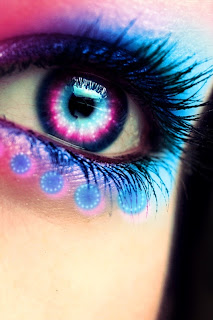 Her eyes tell a story all their own,
A story of someone,
Who was unwanted,
And unloved,
She came from a broken home,
And wondered the streets,
For years,
Before finally finding something,
She could make a living at,
Dancing,
The makeup on her eyes,
Screams for attention,
And after all that time,
She’s okay with that,
She wants the attention,
It translates to money,
And money is the soul,
That makes the world go round,
One night,
She finds herself sitting in her room,
Counting the money,
And looking at the stars through her window,
She wonders what life could have been like,
Had everything not gone to hell,
Something tells her that it could have been fantastic,
But her nightmares remind her,
Of her reality,
She puts the money in her safe,
And lays down,
Knowing that her life,
Is what she made out of it,
And in her head,
The alternative,
Was only death,

When I first saw this picture my brain went to aliens. I don’t know why, but I went another route for this piece. I can’t explain it half the time when my brain pipes in and finds those kinds of piece. But, pictures like this are a major reason I highly enjoy this photo-blogging challenge.

You can connect with me in the following ways:

You can also subscribe to have the blog sent to your email. Get each edition hot off the press. All you have to do is put your email in the box in the upper right hand corner. You can also donate should you feel the urge. To do that use the donate button at the top of the blog.

Until the next time you want to take a trip through the gates of hell and into the demon’s head, I’m Kyle Robinson wishing you a safe trip back to the surface.
Posted by Unknown at 10:23 PM