In The Demon's Head: There's No Need to be Perfect 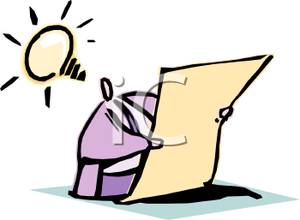 Hello everyone, I hope your all doing well on this Tuesday afternoon. In fact I'll take it a step further and hope that it's a whole lot more cool where your at then here at the moment. I know it's a price to pay for the wonderful summer months but holy shit the heat hasn't let up at all. I'm starting to melt and sadly none of my excess weight is going with it.

It's onto today edition of “In The Demon's Head” where I'd like to issue a personal guarantee to anyone reading this, There's no need to be perfect. Now in life this statement is a given, everyone makes mistakes it happens, what the statement that I'm making refers more toward is your writing.

I had a good friend of mine a few weeks ago come to me and tell me that he wanted to learn how to write like I did, I was flattered and told him to aim his sights higher, but I told him I'd help him as much as I could. I learned that one thing that he seemed to struggle most with was the fact that it would take him an hour to two hours just to write one piece, (He wrote songs mainly but some short poetry) Now I know that for some things like this it takes quite a bit of time to make it through a first draft but looking at what he wanted to write, how much he wanted to write, and what he wanted to do with it, it baffled me that it would take so long, so I asked, “What do you think your number one problem is?”

He told me that he was a perfectionist, that he wanted everything to be right the first time and he would catch himself rewriting lines and sentences, sometimes whole sections just because it wasn't flowing right the first time. This whole backward mentality that he was dealing with was affecting his writing and his thinking process. He would be stuck on an a central section and idea for so long that the rest of the piece would seem to disappear.

Now you could be asking yourself, “Well I don't do that, I write forward and go back? How does this apply to me?” and I'll tell you that it doesn't. If your comfortable just writing what needs to be written first then going back through the editing process then you've cracked the code and this post is more for those who seem to be stuck in a central position.

But how do you get out of it? It's very simple really, it's more a mental block, perfectionism, then anything else. In writing, you have the editing process which means that usually your works will go through 3 or 4 stages of edits before finally being considered good enough to sell or show an outside audience.
This editing process offers up the chance to make mistakes which for many is needed because they'll never get it right the first time. I'm in that same boat and I just recently learned it. I was never a perfectionist by any means, but I was almost certain that my 1st draft of everything I wrote was the best I could do. Then I started editing “More Than Memories” and I learned quickly that there was so much more that I could offer to my work to go back over it.

If your still on the fence about being a perfectionist then that's fine but here's a writing tip for you, well it's more of a writing law, unless you get absolutely lucky, or are completely blind to your own work, you will never, ever, get it right the first time. You can almost always improve it in some way you just have to be willing to find that way.

That about does it for me Today, I know I'm behind and I keep promising for the extra post that I was behind on but I promise it will be up soon. You can keep up with me On Facebook, Twitter, Google Plus or my brand new Robinson's Writings website which is available here. You can also have all the post delivered directly into your email inbox by dropping your address in the box on the upper right and make sure you become a follower of the blog, could net some rewards in the future. Until the next time you want to take a trip through the gates of hell and into the demon's head I'm Kyle Robinson wishing you a safe trip back to the surface.
Posted by Unknown at 4:13 PM